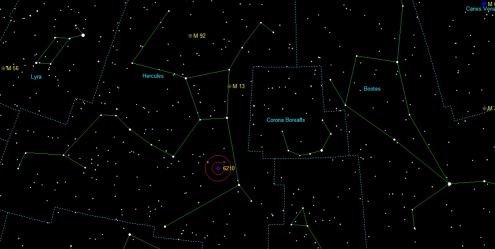 NGC-6210 Planetary Neb in Hercules
The Turtle Nebula
RA 16h44m30s Dec +23deg 48.0’
Size 48”x30” Vmag 8.8
NGC 6210 was discovered in 1827 by the famous double star observer F.G.W. Struve.  Its estimated distance from Earth is estimated at around 6500 light years, though distances to planetary nebulae tend to be rather uncertain.  It is a small object, particularly if you haven’t studied planetary nebulae much.  However, it is very bright.  It should be easily visible at just about any power, with most telescopes.

However, at low power it likely would look just like a star at just a cursory glance.  It should be easily nonstellar with some detail as you approach 200x.  In my 16” the reason for the “turtle” moniker was clearly visible as the object presents itself as a round, bright oval (the turtle’s shell) with a few very short appendages on either side (the turtle’s legs and/or head).  The most striking thing about this object to me is the color.  I right away noticed the object was vividly blue-green, more so than most objects I’ve studied.  Though you don’t need filters to see the object, it does respond quite favorably to the UHC and especially OIII filters.  The central star is listed at magnitude 13.7 but I found the nebula itself too bright to pick out a star of that magnitude.  That feat may require very high power.  This object is on the Astronomical League’s Planetary Nebula program object list.  If you enjoy this object, that list may be a good observing project for you.

The HAS VSIG would love to hear about your own visual observations of NGC 6210.  Send them to the VSIG list server.  To get on the VSIG email list server, contact me at [email protected].

NGC 6397 is one of the brightest globular clusters in the entire sky at magnitude 5.3; so why do I have it listed as a challenge object?  Take a look at that declination again.  NGC 6397 is located far to the south, in the constellation Ara.  It is hopelessly invisible from more northerly latitudes.  It is missing from Messier’s list primarily because it doesn’t even rise above the horizon at Messier’s observing site in France.  Here in Southeast Texas on the other hand, we get just a little bit more sky than they do up north.  Recently, for no apparent reason other than to challenge myself, I’ve gotten somewhat addicted to seeing what kind of far-south stuff I can observe from our latitudes.

NGC 6397 was first discovered by Nicolas-Louis de Lacaille in 1751 on his expedition to South Africa when he also was the first to record several other of the brightest southern deep sky objects, as well as creating many of the southern constellations in use today.  Lacaille’s telescopes were very small, inferior even to Messier’s, and NGC 6397 is widely reported to be a naked-eye object from southern hemisphere locations where it is high in the sky.  Unfortunately, due to atmospheric extinction, it won’t be so easy for us here in Texas.  NGC 6397 was for a long time believed to be the nearest globular cluster to Earth (more recent measurements suggest M4 may be closer).  As a result of this, NGC 6397 has the brightest individual stars of any globular cluster, which makes it particularly easy to resolve into stars.  Indeed, resolving it with my 16” was not especially difficult even with the poor seeing low on the horizon, and is probably still quite possible with smaller scopes.

Because of its far southern declination, you’ll want to try observing it when it is close to transiting the meridian.  Fortunately, finding the timing of this isn’t especially difficult as the constellation Ara is located directly south of a much more familiar constellation, Scorpius.  When Scorpius is at its highest point directly south, that’s the time to try for this object.  The attached chart shows all of Scorpius plus Ara, and I also drew on it the tree line from the central pads at the Dark Site when I observed it (your horizon may vary).  The key is to locate Alpha Arae, the topmost star in the Ara figure, below the bottom stars of Scorpius, and go from there.  Alpha Arae is easily visible naked eye from the Dark Site when at its highest point.  Happy hunting!

The HAS VSIG would love to hear about your own visual observations of NGC 6397.  Send them to the VSIG list server.  To get on the VSIG email list server, contact me at [email protected]. 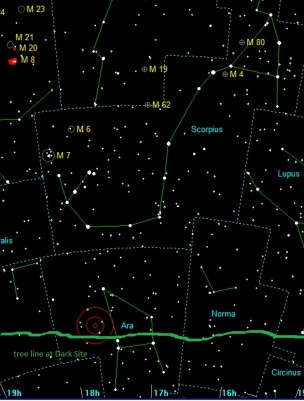