I met Jim Burr, owner of JMI this year at the 2013 Okie Tex Star Party. He set up his beautiful 14 1/2” Reverse Binocular scope for everyone on the two fields to drop by and take a peek through. The last time I observed though a Reverse Binocular was in 1987. The binocular was a 10” handcrafted instrument by Lee Cain, then… our very own HAS president. If you’ve never observed with one, then you’re in for a total surprise and a wonderful treat. Visually they can’t be beat. Your brain is taking on twice the information via photons.

I bet you have seen Jim’s ads in all the popular astronomy magazines through the years showing off his latest gizmo. You might be more familiar with his popular “MotoFocus” electric drive mechanism for all popular focusers. All of his products are very high quality. J.M.I. is in a class by themselves.

I really enjoyed listening to Jim explain how his various products were invented and the use of those giant binoculars of his. Let’s check out Jim Burr here and his hobby/business. Here’s Jim… 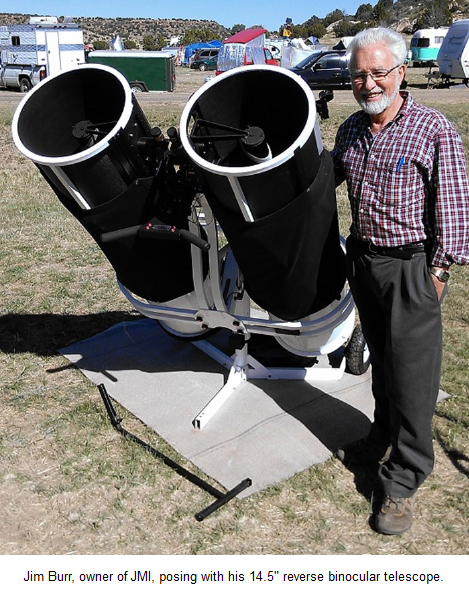 I was raised in Minnesota on a small farm. Times were hard. I learned to work with my father, who was very creative. It was said he could do anything if he set his mind to it. A man came to a camp meeting to show pictures of the stars. He was very enthusiastic and it caught my interest. Had it not been for him JMI would not exist.

School was difficult because of my dyslexia. When people ask about my education, I usually tell them I was a high school dropout. Actually, my body graduated, but my mind dropped out a long time before. I was always interested in electronics and physics. The high school teacher even asked me to teach a class or two on electricity, even though I barely passed some of the classes.

After high school, I went to trade school in Chicago to study electronics, began working for RCA doing television repair and was later promoted to a teaching position at the RCA training center in Los Angeles. I married and transferred to Denver in 1969, but had to leave RCA because I would not work on the Sabbath. I started a mobile TV repair business.

In 1979, I took a class in astronomy and built a telescope. The telescope vibrated with the slightest touch so I invented Motofocus, patented in 1983, which provided hands-free focusing. That put us on the map.

Next, I built the 18” Next Generation Telescope, NGT-18. It took 7 years. We expanded, hiring 2 employees in 1988. We could not build them fast enough. We were often selling 3 per week. One Japanese dealer would order 2 to 4 at a time. Then, it was on to the 25” and 30” New Technology Telescopes, NTT-25 and NTT-30. NASA ordered two for testing: Planning to use them for data transmission from Mars using a laser. Currently, they are able to achieve 1 Mbps, the laser will increase the transmission rate by 100X. NASA tested the data transmission system with the MESSENGER spacecraft on its way to image Mercury, turning the spacecraft around and firing the laser back at Earth in June 2005. It was 11:00 am and MESSENGER was not far from the sun. It blew me away to think they were going to see that little laser some 50 million miles away in broad daylight.

Being in the TV business, I was also involved in home satellite systems. In 1980, I designed a single-pole mount for 10 ft dishes. Dish Network saw it, licensed it, and hired me as a consultant. At the time, there were only 3 people at Dish Network. Today, there are probably 30,000 employees, and I am still a consultant with their engineering department.

After taking the astronomy class, I began sharing what I was learning with my youth class in church. A member moved to Chicago and invited me there to speak. Someone from a TV network saw it and invited me to do TV productions. I made a few trips to Illinois and did sixteen 1/2 hr programs. Over the years, they have invited me back about 13 times doing ten 2 hr live call-in shows. Then, there was an invitation from California and I did thirty-two 1/2 hr programs entitled “The Hubble, the Bible, and the Big Bang.” These programs are carried on satellites all over the world. I received a FAX from Moscow saying, “I watch you on Sputnik TV”. So I have been invited to speak all over the world on the subject. I’ve been to Russia four times speaking in 20 cities. 13 lectures in France, Australia, Panama, Bahamas, and two trips to Alaska. I have also presented at camps schools and the University of Greeley Summer Science Program for 10 years. I do about 8 to 9 lectures a month. One week, I was on 7 planes. At age 75, life is extremely fulfilling and exciting.

Clayton: I really enjoyed reading your Bio. You are truly a self-made man. It was a real pleasure meeting you at Okie Tex 2013. Because the economy is not that great in these times, how is business?

Jim: I am sure you will not be surprised we were impacted by the economic downturn. Large purchases are delayed money is tight.

Clayton: You brought a 14.5" reverse binocular telescope to Okie-Tex this year. I have looked through binoculars, closed one eye and seen faint stars/objects blink out. I didn't think to do it while looking through the 14.5" but I saw M31 and M33 like never before. What is the binocular advantage and any chance you'll bring the scope to the Texas Star Party next year?

Jim: What you experienced is real! Contrast goes up 40% according to Dr. Tom Mote who performed the research. I will try to put something on the website. Although illusory, many people experience the 3-D effect. And, you get less eye fatigue compared to viewing with only one eye.

Clayton: Binoculars are more complex optical instruments than telescopes, not only must each side be collimated the images must merge: This is what binocular users refer to as collimation. Yes it is confusing!. When standard binoculars become miscollimated it can be an ordeal to get them fixed. How are these adjustments handled with your reverse binocular telescopes?

Jim: There are two issues. Collimation and convergence. The scopes are collimated like any Newtonian. Converging the two scopes is done with two motors at the nose assembly. Each scope has a set of bearings at the center of gravity. One tube moves left or right, the other up or down. Convergence is achieved by moving only two switches. It really is that simple.

Clayton: Binoculars can be difficult to share: Observers possess a wide variety of interpupillary distances (IPD). You sell two types of reverse binoculars and they differ in how you account for IPD. Please explain and include the relationship to focusing.

Jim: Changing IPD changes focus. Readjusting the focus is done with electric motors. The new 12" and 8" under development rotate the upper cage/focuser to change eye spacing and does not effect the focus.

Clayton: Binoculars seem to become difficult to handle as the aperture increases, yet you sell reverse binoculars from 6" all the way to 16" in diameter, two large telescopes. How have you been able to make them portable? You setup the 14.5" at Okie Tex faster than my friend could set up his Dobsonian!

Jim: We put them on wheels with a handlebar, see the picture above of me standing next to a 14.5” binocular telescope. I drove up to the observing site in a van, and with the help of two ramps unload the scope fully assembled. The remaining adjustments, discussed previously, took only few minutes. Your friend never had a chance.

Clayton: You told me about how you come up with many ideas in designing and building your equipment. Do you have employees onboard that help design?

Jim: Yes, there are two that do a lot of the design work, Tom Johnston and Steve Sherry. We worked closely for many years.

Clayton: I’d like to know a little about your personal telescope(s).

Jim: For ten years I had a 40" telescope in the garage on a 4-wheel trailer. There was a motor drive on the tongue. Throw a switch and it would come out slowly and go back the same way. I later sold it. Today, I have a 12" binocular telescope and a 12" Newtonian.

Clayton: While looking over your online catalog, you have made astronomy much easier for the amateur with your motor controls, shrouds, scope cases, focusers, wheeley bars, not forgetting the Reverse Binos and the NGT (Next Generation Telescope) and even your newest NTT 25”, 30”, and 40” Dobs. So my question is….what’s next?

Clayton: How would you like to see your own personal astronomy grow?

Jim: More observing time! JMI has really spoiled my hobby, although I love what I am doing. We live at 7,200-ft elevation in the mountains of Colorado.

Clayton: In your travels, are you seeing more or less younger people involved in this hobby?

Jim: I don't think I see much change.

Clayton: Do you have any helpful advice to pass on to observers just starting out in astronomy?

Jim: Buy the biggest telescope you can afford and only cry once. Enjoy it and share with everyone you can. That is what I have tried to do. Someone did it for me. I get 100 invitations to speak every year, due to the TV shows I do. I don't just spit out facts. They can get that on the internet. I developed my own delivery style. If anyone would like a sample DVD e-mail me (see the GuideStar for address), or go to www.heavensdeclare.org and click on youtube. These presentations are from a Biblical perspective. There are fourteen 90-second spots airing on DISH channel 9393.

Clayton: Is there an email address that you have that a Houston Astronomical Society member could contact you for an additional question or two? Jim: See the GuideStar for address.

Clayton: Thanks Jim for taking the time to share your interest and thoughts within our HAS newsletter, the GuideStar. We wish you luck with all of your personal astronomy interest and business success at JMI. Please come visit our society when in the Houston area, we’d love to see you.

Jim: You too Clayton…

Clayton is an avid SCT visual observer and a longtime member of the Houston Astronomical Society.