How Many Discoveries Can You Make in a Month?

This year NASA has announced the discovery of 11 planetary systems hosting 26 planets; a gigantic cluster of galaxies known as “El Gordo;” a star exploding 9 billion light years away; alien matter stealing into the solar system; massive bullets of plasma racing out of the galactic center; and hundreds of unknown objects emitting high-energy photons at the edge of the electromagnetic spectrum.

That was just January.

Within NASA’s Science Mission Directorate, the Astrophysics Division produces such a list nearly every month. Indeed, at this very moment, data is pouring in from dozens of spacecraft and orbiting observatories. 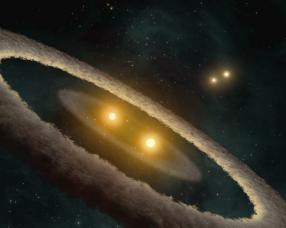 NASA astrophysicists and their colleagues conduct an ambitious research program stretching from the edge of the solar system to the edge of the observable Universe. Their work is guided in large part by the National Research Council’s Decadal Survey of Astronomy and Astrophysics, which identified the following priorities:

Observing time on Hubble and the other “Great Observatories” is allocated accordingly.

Smaller missions are important, too: The Kepler spacecraft, which is only “medium-sized” by NASA standards, has single-handedly identified more than 2300 planet candidates. Recent finds include planets with double suns, massive “super-Earths” and “hot Jupiters,” and a miniature solar system. It seems to be only a matter of time before Kepler locates an Earth-sized world in the Goldilocks zone of its parent star, just right for life.

A future astrophysics mission, the James Webb Space Telescope, will be able to study the atmospheres of many of the worlds Kepler is discovering now. The telescope’s spectrometers can reveal the chemistry of distant exoplanets, offering clues to their climate, cloud cover, and possibilities for life.

That’s not the telescope’s prime mission, though. With a primary mirror almost 3 times as wide as Hubble’s, and a special sensitivity to penetrating infrared radiation, Webb is designed to look into the most distant recesses of the universe to see how the first stars and galaxies formed after the Big Bang. It is, in short, a Genesis Machine.

Says Bolden, “We’re on track in the construction of the James Webb Space Telescope, the most sophisticated science telescope ever constructed to help us reveal the mysteries of the cosmos in ways never before possible.” Liftoff is currently scheduled for 2018.

How long will the list of discoveries be in January of that year? Stay tuned for Astrophysics.

For more on NASA’s astrophysics missions, check out http://science.nasa.gov/astrophysics/.

Kids can get some of their mind-boggling astrophysics questions answered by resident Space Place astrophysicist “Dr. Marc” at http://spaceplace.nasa.gov/dr-marc-space.

This article was provided by the Jet Propulsion Laboratory, California Institute of Technology, under a contract with the National Aeronautics and Space Administration.