HD32963—Host for a Jupiter-Sized Planet 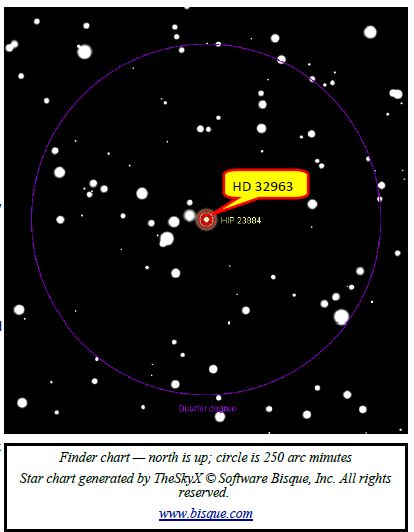 There’s an article in this GuideStar about the Frequency of Jupiter-Like Planets and the work Dominick Rowan is doing to establish how frequently these planets show up in extra-solar planetary systems.

Included in this study is a newly found Jupiter sized (.7 Jupiter) planet around star HD 32963. This is a 7.6 magnitude star in the constellation Taurus and it should not be a challenge to see. The finder chart to the right shows a circle of 1/4 of a degree (250 arc minutes) with a distinctive arc of three 11th magnitude stars just east of the subject star.

The star is just smaller than our Sun at .94 solar masses and the same color as our Sun. How would the Sun look if you were on a planet orbiting this star? It would look like this star!

If you’re wondering what they named this planet… it’s not very interesting. It’s HD 32683 b. It is known to have an orbital period of approximately 2372 days or about 6.5 Earth years.

The planet was discovered using the radial velocity method, a method that only works well on large planets orbiting close enough to the star to impart enough tug on the star that it moves. This movement is detected by a spectrograph as a (Doppler) shift in the color of the light received from the star.

As I’ve said several times in this area of the GuideStar, stars often have multiple designations as a result of being in multiple catalogs.

The HD (Henry Draper) catalog was published between 1918 and 1924 with spectral information for over 225,000 stars. The limiting magnitude on the catalog is about 9.

The SAO (Smithsonian Astronomical Observatory) catalog was published in 1966 and its purpose is to identify locations of stars on the sky (astrometry) accurately. It contains about 260,000 stars with a limiting magnitude of 9.

The most recent catalog, the Hipparcos (HIP) catalog was developed from data gathered by the European Space Agency’s Hipparcos satellite (1989—1993). This is high accuracy (in position) data, used, among other things to better determine the distance to stars using the parallax method. There are over 118,000 stars in this catalog.