Harry Potter and the Orbit of Venus

In the book “Harry Potter and the Order of the Phoenix”, it is stated that as part of his “Astronomy O.W.L.” (some sort of year-end wizarding final exam that is required to get an academic credential) he observed the planet Venus. The book states that the exam started at 11PM.  Of course in the real world, Venus does not stray far from the sun, and so cannot be seen much outside twilight, certainly not that late. Right? It’s a work of fiction and we should not expect there to be any correspondence with the real world, after all! There was even a letter to the editor complaining about this impossible scene published in Sky and Telescope that I remember reading. But then what is that bright object low in the West late at night this month? Just how late can Venus set? 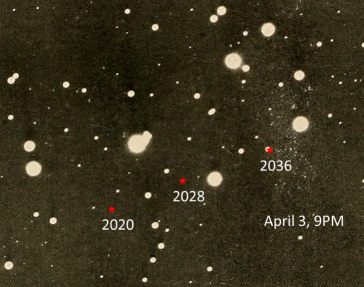 ition of Venus in the morning or evening skies is unique, and searching for the latest Venus-set would require an exhaustive computer search. You’d be wrong. Over the span of decades of a human lifetime there are only 5 evening apparitions of Venus, and they repeat every 8 years like clockwork. This is a consequence of the orbital period of Venus, 224.70 days, and of Earth, 365.26 days. As you can easily verify with a calculator, 8 orbits of Earth is only about a day longer than 13 orbits of Venus. Thus every 8 Earth years Venus laps Earth 5 times, and the positions of the two planets nearly precisely repeat. If you have a good astronomy app on your phone or tablet (I use “Sky Safari”, but there are several to choose from), try looking up the position of Venus on April 3 at 9PM. You’ll find it passing through the conspicuous naked-eye star cluster called the Pleiades.  (Many members of the public are sure the Pleiades is the little dipper, but it’s not. To avoid confusion, I propose calling it the “micro dipper”!) Then try setting the time to 8 years into the future --- there it is again!

As you can verify with your astronomy app, of the 5 evening apparitions the one of Spring 2004, 2012, 2020, … is by far the highest. From Houston the latest Venus sets in 2020 is at 11:25PM on April 12. So even from Houston it is possible to see Venus at 11PM. What about midnight? Can Venus be seen at midnight from Texas? Venus sets so late because it is quite far North in the sky, just like the sun sets latest when it is at its Northernmost, on the Summer solstice. If we go farther North Venus will set even later, just like the June days are longer the farther North you go. By going West (but staying in the central time zone) we can also make it appear to set later, at least according to your clock. You can verify that in the extreme NorthWest corner of Texas (at Texline, close to both Oklahoma and New Mexico) Venus sets after midnight on April 12. So Venus can set after midnight even from Texas.

But presumably enlightened wizards don’t use muggle daylight saving time. What then? The wizard school of Hogwarts is presented as being somewhere in Scotland. Taking Edinburgh as a typical Scottish location, we find that on April 23 Venus sets at 1:25 AM “British Summer time” (the British name for daylight saving time). So even without setting the clocks ahead an hour Venus still sets well after midnight from Scotland. But perhaps we are giving J. K. Rowling too much benefit… after all, Venus setting so late only happens for about a month, once every 8 years. When did Harry Potter supposedly make this observation? Does it fit? According to fan chronologies, his “Astronomy O.W.L.” came at the end of school term in the Spring of 1996. Which is indeed a multiple of 8 years before 2020. It appears J. K. Rowling knew something about astronomy after all… and now we know the wizard school year must end in late April or early May!

First published in the Dashing Diplodocus, the magazine of the volunteer guild of the Houston Museum of Natural Science, and reprinted in the HAS Guidestar by permission.