The Gray Cubicle You Want to Work In

It's another day at the office.

You're sitting in a gray cubicle, tap-tap-taping away on your keyboard, when suddenly your neighbor lets out a whoop of delight.

Over the top of the carpeted divider you see a star exploding on the computer screen. An unauthorized video game? No, this explosion is real. A massive star just went supernova in the Whirlpool Galaxy, and the first images from Hubble are popping up on your office-mate’s screen. 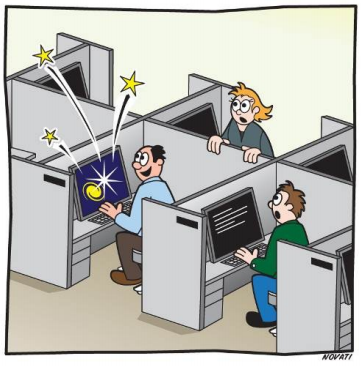 Just down the hall, another office-mate is analyzing global temperature trends. On the floor below, a team of engineers gathers to decode signals from a spaceship that entered “safe mode” when it was hit by a solar flare. And three floors above, a financial analyst snaps her pencil-tip as she tries to figure out how to afford just one more sensor for a new robotic spacecraft.

These are just a few of the things going on every day at NASA headquarters in Washington DC and more than a dozen other NASA centers scattered around the country. The variety of NASA research and, moreover, the variety of NASA people required to carry it out often comes as a surprise. Consider the following:

NASA's Science Mission Directorate (SMD) supports research in four main areas: Earth Science, Heliophysics, Astrophysics, and Planetary Science. Read that list one more time. It includes everything in the cosmos from the ground beneath our feet to the Sun in the sky to the most distant galaxies at the edge of the Universe. Walking among the cubicles in NASA’s science offices, you are likely to meet people working on climate change, extraterrestrial life, Earth-threatening asteroids, black holes or a hundred other things guaranteed to give a curious-minded person goose bumps. Truly, no other government agency has a bigger job description.

And it’s not just scientists doing the work. NASA needs engineers to design its observatories and build its spacecraft, mathematicians to analyze orbits and decipher signals, and financial wizards to manage the accounts and figure out how to pay for everything NASA dreamers want to do. Even writers and artists have a place in the NASA scheme of things. Someone has to explain it all to the general public.

Clearly, some cubicles are more interesting than others. For more information about the Science Mission Directorate, visit science.nasa.gov. And for another way to reach the Space Place, go to http://science.nasa.gov/kids.