Getting Kids Into Astronomy 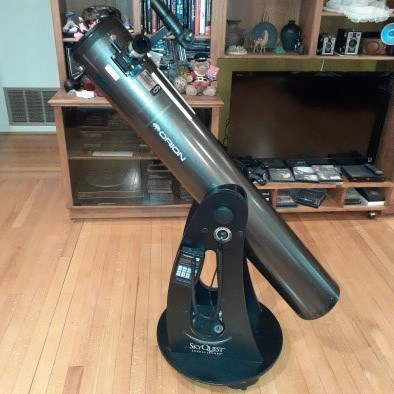 I recently began a new project designed to get children actively involved in astronomy by observing with their own telescope. My idea is to find old telescopes that might need a little TLC, like a new coat of paint, add on a Telrad or something of that nature. My goal is to find some 6” – 10” telescopes with descent optics at a low cost. Rather than putting money into purchasing scopes, I wanted to spend the money making the telescope a personalized scope for a specific child. The child would choose the color, choose how to decorate it and choose a name for it. I feel this will really make it their own and instill a “pride of ownership” in the child. I also hope that if the children have their own telescopes, they would be more likely to want to get out with them to observe. In other words, I hope to light that spark of interest. The plan is to have the children actually do a lot of the work themselves. I also plan to work with the children, helping them learn how to be an observer.

The first child on my list was Abhi Gudipati, a member of the Fort Bend Astronomy Club and the Houston Astronomical Society. He’s a very bright and friendly 15 year old who is very active in outreach with the Fort Bend club. I reached out to the local clubs for a 10” telescope and was fortunate enough that Brian Cudnik had one that he was willing to donate to the project. Abhi and I had only a few hours to work on it before the Coronavirus put the project on hold. I’ll give an update on this one once it’s completed. 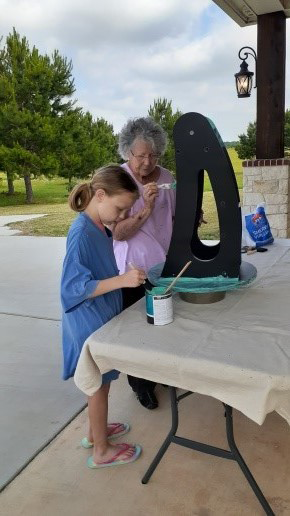 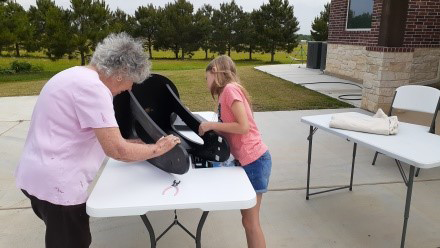 The second child on my list was Madison Withrow, the 10 year old granddaughter of Becky and Joel Brewer, also of the Fort Bend Astronomy Club and Houston Astronomical Society. I met her at TSP a couple of years ago and have seen her at Fort Bend outreach events and at the Houston Astronomical Society dark site.  Allen Wilkerson had a 6” Dob in the H.A.S. loner scope program that he was willing to let go for a $150 donation to the club. I snatched it up. As it turned out, Becky and Joel insisted on repaying me for the scope so that I could use that money on another project for another child.

The telescope is in good shape. It only needed a good mirror cleaning.  The telescope came equipped with electronics for go-to, which we promptly removed. Joel agreed with me that we really do not want to fool with electronics at this early stage of the game. All we want is a simple Dob. They are much easier for a child to use.

Madison and I discussed what she wanted to do with the telescope.  Her only real requests were that the telescope be a sparkly teal color and have an M on it. I asked if she had chosen a name for it but she had not. I suggested the name, Maia, who, in Greek mythology, was the first of the 7 sisters. I told her that we could paint the letters for her name in a contrasting purple color and put them on the telescope. I also suggested that we put the Pleiades on the telescope using purple rhinestones or crystals. Madison loved the suggestions so I went off 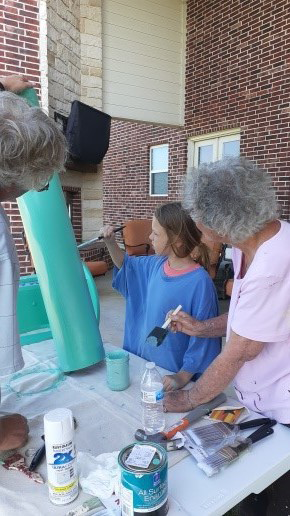 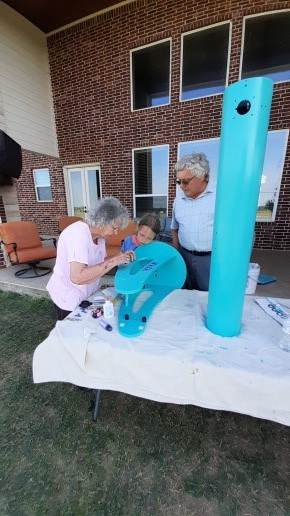 Michael’s for supplies. In order to get the “sparkly” look that she wanted, I chose metallic paint for the telescope tube. It shimmers in the light. While at Michael’s, I also found a pretty log book for her to use to record her observations.

Madison helped to sand off all the old paint and repaint with her chosen color. She also helped to put the lettering and the crystals for the Pleiades on the scope.

Once the painting was finished, we took a break for dinner. After dinner, we put the scope back together again and took it outside. Madison was able to find the Moon and Venus.  She recorded her observations in the log book that I gave to her. 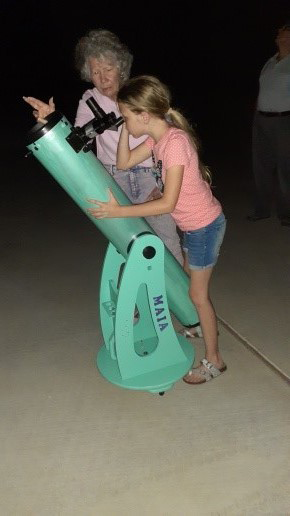 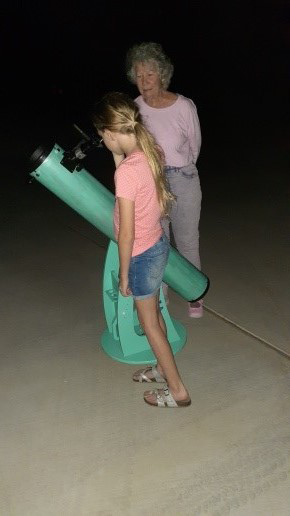 I call this one a huge success story! 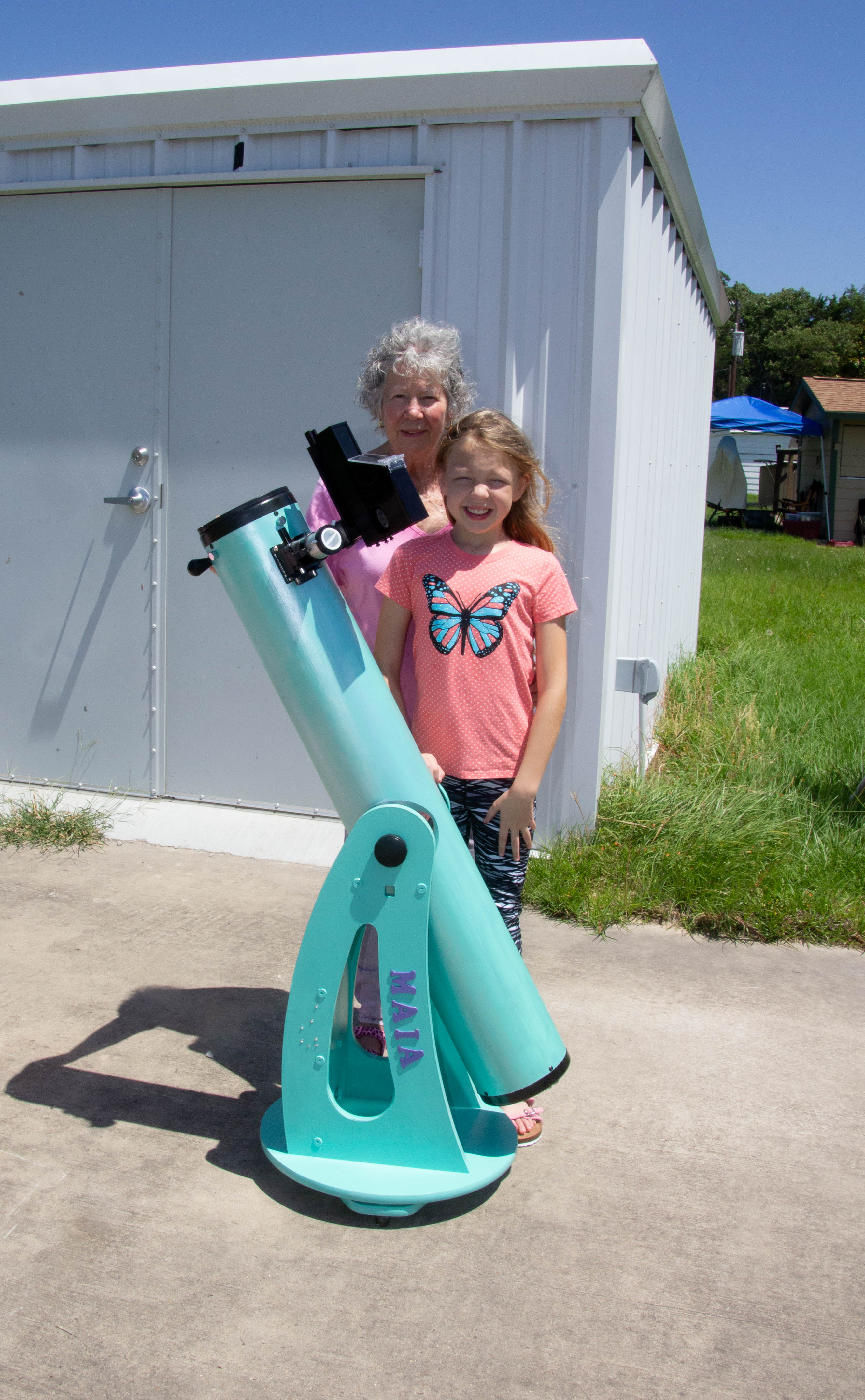 I would love to keep doing these projects with more children.  So, for those of you who might have an old DOB telescope just sitting in the garage gathering dust, I WANT IT. Cheap. Or even better, donate it to the cause. Please consider giving it a new life with a child. Perhaps you don’t have a telescope but do have some old eyepieces, an old finder scope or Telrad that you no longer use.  Those would certainly be welcome additions to these projects. Contact info:  [email protected]