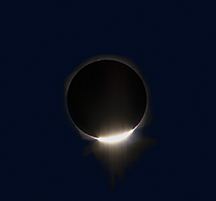 The month’s Guidestar cover is a wonderful image by HAS member Don Taylor of the eclipse of August 21, 2017. I thought it was very appropriate image for the April cover because the next total eclipse to race across much of the USA will happen on April 8, 2024, and we are a little more than half-way timewise between the two events.

The 2017 event was dubbed the Great American Eclipse because the path of totality ran the entire length of the USA. From the Pacific Ocean, it crossed the Oregon coast, ran across the Rockies and Midwest, then exited into the Atlantic Ocean over the coastline of South Carolina. The build-up for the event was tremendous – practically everyone knew it was coming, and its summer date encouraged many (including me) to schedule family vacations planned for observing the eclipse.

Don’s image brought back some great memories of my (extended) families’ trip to Teton Village Wy in the Jackson Hole area, where we were less than a mile from the center line of the eclipse. The week we spent together included tours of Grand Teton and Yellowstone National Parks – some of the best scenery to be found anywhere.

Though it passes through much of the USA, I doubt the build-up for 2024 eclipse will come close to 2017’s. While others might not consider it to be as “great” as the 2017 eclipse, we Texans have a lot to brag about since the path of totality runs smack dab through the middle of our state. Coming north from Mexico the path of totality will race through the heart of the Hill Country nearby Kerrville and Fredericksburg, then on north and cross Lake Buchanan, the pass Waco and Dallas before it jumps the border into Arkansas.

Still its three years from now, isn’t it really too early to get excited about the Great Texas Eclipse? Maybe a little, though I know folks from across the country that have already decided where they want to stay to observe it. Typically, though you won’t be able to book anyplace until next year at this time, and the good spots will go fast. So maybe you should consider a trip or two to scout out locations before bookings open up.

I can tell you, that strategy worked for me in 2017. After being totally rained out of the “Great Asian Eclipse” of July 22, 2009 (I was in Wuhan China of all places – who knew then!?) I was determined to get to the best spot in 2017. I nearly broke Google Maps researching different locations in late 2014, and as soon as we could request bookings on VRBO for the week of the eclipse we requested condo reservations in Teton Village. We were upfront about the reason for the booking dates, and got the condo on the top of our list because the others requesting the same week did not mention the eclipse.

Over the next 18 months as I continued to refine our trip plans, I think my wife MJ began to think I was a bit obsessed (ok maybe I was). She looked at the event as a nice trip and the eclipse was my thing, sort of a curiosity but not something she was really excited about.

Observing your first total eclipse is an awesome experience. Dedicated eclipse chasers will tell you it is an experience that never gets old.

When the clouds parted just before first contact, MJ started getting into things. When totality occurred, as thousands gathered nearby to observe the eclipse started to cheer loudly, and the landscape took on an other worldly appearance, it was so amazing, we were all overcome with a torrent of different emotions.

Even my wife, who was nonchalant the day before was totally overcome. And in that moment, I asked her the crucial question – “how about we plan to travel to Chile for the July 2, 2019 total eclipse” she was speechless, and almost agreed.

Maybe in Texas, in 2024, the answer will be different!