Eye in The Sky

First published in the February 1983 edition of the Sky Scanner, the newsletter of the Brevard Astronomical Society.

Eye in the Sky 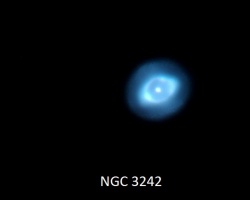 Editor’s Note – This article was the inspiration for my February 2021 Field of View column entitled “Observe”. It exactly illustrates the point I was trying to make there that learning to observe astronomical objects is a doorway to continuous learning and can’t help but affect how you view the world around you. DS.

I know as an amateur astronomer I have a tendency when I go out at night with my telescope to stay observing in the brighter constellations because they still hold lots I have not seen yet, and it is also a little easier to find things there because of the brighter star patterns.  Another tendency of mine is to skip over the little planetary nebula symbols on my charts because often they are so faint, small, and difficult that I would be wasting my time endeavoring to find them.

Well, just the other night I saw the neat asterism of the head of Hydra and, being well placed in the sky, I decided a review of this constellation was long overdue.  I found that although this constellation is no showpiece, it certainly contains one.  It just happens to be a planetary nebula too. The nebula is NGC 3242 and it is located a little less than two degrees south of the naked eye star mu (or 42) Hydrae.  Walter Scott Houston goes along with the Atlas Catalogue and Burham’s saying that the nebula is about a nine (magnitude, that is).  But Chesley Runyon, Jr., who writes for Deep Sky Monthly, and I say it is distinctly brighter; Mr. Runyon saying 8.5 and I say 8.4 or 8.5.  Burnham’s quotes it as being 40” x 35” thereby giving rise to the name “Ghost of Jupiter,” but I think it really merits being called the “Eye Nebula.”  This seems like a strange name and, to be sure, at 85x there is little to distinguish this nebula from the many others, but at 300x in my 8” f/6.5 Newtonian much detail begins to reveal itself.  There is an outer ring of 40” diameter with a central annulus that has the shape of an eye.  In the very center is an 11.4 (photographic) magnitude central star that plays the role of a pupil.  Even though this brightness would indicate ease of location, at 300x I could barely discern the star because the surrounding nebulosity is very bright.  However, at 375x it is clearer and can be spotted more easily because the higher magnification enlarges and dims the nebulosity providing for better contrast.  I think the best view in my scope would have been at about 400-500x.  Unfortunately, I do not have the eyepieces for that
.