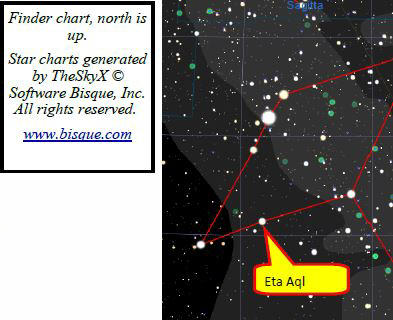 Every star has a claim to fame, and Eta Aql’s claim is that it is a bright Cepheid variable star.

Edwin Hubble used this characteristic of Cepheid variables to find such a variable in the Andromeda Galaxy. Once he had identified the period of the variable he knew the intrinsic brightness, and he used the simple inverse square law to determine the distance to the galaxy.

So, what will you see if you look at this star? You’ll be looking at a star that is larger than the Sun — about 7 solar masses. The period of variability for the star is almost exactly one week. So, it’s easy to observe a fully cycle of brightness for this star (if we ever have 7 clear days in a row).

In fact, Eta Aql may be the first Cepheid variable star discovered. The protypical star for this class of variables is Delta Cephius, not Eta Aql, however.

You can create a observing chart for this star at the AAVSO.org web site or look on page 13 of Annals of the Deep Sky (Volume 2) by Jeff Kanipe & Dennis Webb.

Like all Cepheid variables, this is a late life star that has moved on from fusing Hydrogen to Helium and now fusing Helium to Carbon and Oxygen. At about 7 solar masses this star is on the edge of being high mass star, one that continues fusing Carbon and Oxygen to heaver elements, Neon is next, but the final stage is Iron which cannot be fused in the way that lighter elements have been fused.

Information that I’ve found indicates that this star will end its life in a way that corresponds with low mass stars. That is, the star will cast off its outer shell of dormant material, become a white dwarf (a remnant of the original star that is no longer ‘burning’). The white dwarf’s radiation will light up the material now surrounding the star and future astronomers will see it as a planetary nebula.

Thanks to Jeff Kanipe and Dennis Webb for pointing out this star to me.