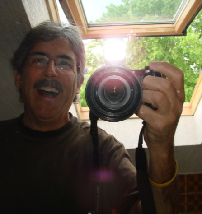 Dave Kriege is and has been a recognized name in the astronomy communities throughout the world. Dave is the maker of the fine “Obsession” Dobsonian telescope. I have always thought that John Dobson was the person that had the idea, “Coulter” telescopes got the revolution started, but it was Dave’s “Obsession” scopes that perfected this design and are now at star parties around the country (world). There are thousands!

He makes two designs; the Classic and the newer Ultra Compact (UC). Both versions have beautiful design and built in quality. Stunning to use on the field is an understatement.

I know you guys have been waiting on me to finally interview this well-known telescope maker. The time has come… here’s Dave… 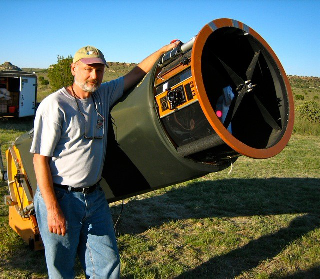 I’m 58 years old from Lake Mills Wisconsin. I’m married with two grown daughters. I've been a dentist the last 33 years and a telescope maker the last 46 years. I started Obsession Telescopes in 1991 and have over 2000 Classic and Ultra Compact scopes under the stars. I credit my wife for the name Obsession. When I was building my first Dob, a 20 incher, she screamed down the basement stairs "Are you working on that damn telescope again. You're obsessed with it." I've built scopes from 4 inches to 36’ers. In 1997 I released “THE DOBSONIAN TELESCOPE, A Manual to Build Larger Aperture Telescopes” by Kriege and Berry. My scopes are the most copied Dobs on the market by ATMs and professional TMs. I spend as much time as I can in the “House of Obsession”, my 26’ x 27’ roll off roof observatory near my home with my 25" inside. My favorite star party is Okie-Tex. And my favorite observing is deep sky objects. Of course my favorite telescope is my 25" Classic that I built in 1989. My future plan is to retire from dentistry so I can cut back to full time work making scopes… my Obsession!

Clayton: How did you first become interested in astronomy?

Dave: When I was in the 8th grade, my father and I made a 4 inch reflector for a science project. One look at the stars and I was hooked.

Clayton: Do you think that by becoming involved in astronomy and building your own line of scopes, it has somehow changed a direction in your life?

Dave: Hmmm, I’m a dentist by education. I’ve been doing teeth for 33 years. Dentistry is all negatives. Patients don't like to go to the dentist, they don't like the expense, and it's an inconvenience. Telescopes and astronomy are the opposite. People love deep sky views thru a big Dob. They want to spend the money and they enjoy the wonder and beauty of the universe. The two careers balance each other.

Clayton: Have you ever dabbled in astrophotography?

Dave: Yes, with film. I never understood the appeal though. There are so many awesome astrophotos taken by major observatories, the Hubble, and people with advanced equipment. Why try to copy their work. It's like everyone standing on the exact same spot taking photos of the Washington monument. I agree with John Dobson who said “astrophotography is a disease". I prefer aperture fever and real time photons on my retina.

Clayton: You seem to be very proactive in making better scopes.... what's new on the horizon for "Obsession Telescopes", or is this top secret?

Dave: Adaptive optics, real time CCD eyepieces (no camera or laptop needed), and large aperture telescopes that can be folded up and taken on airplanes.

Clayton: Do you own different telescope designs other than Dobsonians?

Dave: No. Nothing beats a Dob when it comes to aperture per dollar. The whole reason to have a telescope is to see the universe better. Nothing else does this better for the money than a Dobsonian.

Clayton: Tell us about a typical observing session for yourself.

Dave: A typical night warms up with a few celestial celebrities. For example M35 and neighboring cluster, the Dog bone, Medusa, M42, Thors helmet, the trio in Leo, etc. Then when my eye/brain is up to speed I go for obscure objects featured in the magazines, news, field books.

I try to find at least one really new cool object each time I go out.

Clayton: What is so special about the Okie Tex star party for you?

Dave: It’s very dark, a relaxed laid back crowd, wifi is on the field, a perfect time of year with perfect observing and climate, only 1000 miles from home, and plenty of space to spread out my rig, scope, and party tent.

Clayton: What other star parties do you attend?

Dave: The Two Hearted River Star party in the UP of Michigan, Astrofest occasionally. TSP is a great one but it's too far for me.

Clayton: Do you have any helpful advice to pass on to observers just starting out in astronomy? What do you tell ATM’ers?

Dave: Come on over and I'll give you a tour of the universe. Beginners need to find an enthusiastic "big brother". Someone that can help them get started and out under the stars.

Make the biggest scope you can afford and are comfortable using. Nobody ever regrets aperture.

Clayton: I’d like to know a little more about your telescope(s).

Dave: My personal scope is a 25 f/5. I built it in 1989. It was Obsession #2. Obsession #1 was a 20" I brought to Astrofest in 1987 that appeared on the cover of the old “Telescope Making” Magazine. My 25" has over 50000 miles on it to star parties around North America, a billion of light years worth of photons, and thousands of hours of astronomy enjoyment. Nebulae, globulars, galaxies come screaming out of the eyepiece. After 23 years I still get excited every time I use it.My Classic production line of Dobs is identical in design but have much better fabrication. My “House of Obsession” is a 26 x 27 foot roll off roof observatory in my yard. It has a warm room and enough space for my scope and gear. The roof can be opened or closed with only one hand. I love it out there.

Clayton: It seems in recent years that the younger people are not that interested in amateur astronomy, or any of the sciences. How can we turn this around?

They will only be interested in astronomy on a display. Observing on a display (tv, laptop) from remote telescopes on mountain tops would be a good start. World class equipment, observations from pristine dark sites, all streamed to your living room on your TV or laptop. Wouldn't that be cool?

Clayton: How would you like to see your astronomy grow?

Dave: After I cut back to full time work (instead of 80 hours per week now) I want to go to more dark sites, more star parties, and actually try to do the M objects and Herschel lists. I've seen many thousands of objects and my Uranometria volumes are chock full of notes. But I want to systematically do the lists. I also plan on taking some astronomy courses at UW Madison.

Clayton: Is there an email address that you have that a Houston Astronomical Society member could contact you for an additional question or two?

Clayton: Thanks Dave for taking the time to share your interest and thoughts within our HAS newsletter, ‘The Guide Star’. We wish you luck with all of your astronomy interests. Please come visit our society when in the Houston area, we’d love to see you.