Corner the Great Square of Pegasus

The Summer Triangle may be the most famous seasonal star pattern, but during early August evenings another geometrically-themed asterism rises: the Great Square of Pegasus. This asterism’s name is a bit misleading: while three of its stars - Scheat, Markab, and Algenib - are indeed found in the constellation of the winged horse Pegasus, its fourth star, Alpheratz, is the brightest star in the constellation Andromeda!

While the stars of the Great Square of Pegasus are not as bright as those of the Summer Triangle, they still stand out compared to their neighbors, and make a great foundation for exploring this area of the night sky. Note that the brightness of the stars near the horizon is  exaggerated in this picture.

August evenings are an excellent time to look for the Great Square, as it will be rising in the east after sunset. If not obvious at first, wait for this star pattern to rise a bit above the murky air, and remember that depending on your point of view, it may appear more like a diamond than a square. Look for it below the Summer Triangle, or to the southeast of nearby Cassiopeia at this time. As the Great Square rises in prominence during autumn evenings, it becomes a handy guidepost to finding more constellations, including some of the dimmer members of the Zodiac: Aries, Pisces, Aquarius, and Capricornus. Like the Summer Triangle, the Great Square of Pegasus is also huge, but Pegasus itself is even larger; out of the 88 constellations, Pegasus is 7th in size, and feels larger as the stars in its neighboring constellations are much dimmer.

There are many notable deep-sky objects found within the stars of Pegasus - ranging from easily spotted to expert level targets - making it a great constellation to revisit as your observing skills improve. Notable objects include the densely-packed stars of globular cluster M15, a great first target. The potential “Milky Way look-alike” galaxy NGC 7331 is a fun target for more advanced observers, and expert observers can hop nearby to try to tease out the much dimmer interacting galaxies of Stephan’s Quintet. A fascinating (but extremely difficult to observe) object is a gravitationally-lensed quasar famously known as the Einstein Cross. Pegasus has quite a storied history in the field of exoplanet research: 51 Pegasi was the first Sun-like star discovered to be host to a planet outside our solar system, now officially named Dimidiam.

While observing Pegasus and its surroundings, keep your eyes relaxed and ready to catch some Perseids, too! August 2021 promises an excellent showing of this annual meteor shower. The crescent Moon sets early on the evening of the shower’s peak on August 11-12, but you can spot stray Perseids most of the month. If you trace the path of these meteors, you’ll find they originate from one point in Perseus - their radiant. Giant planets Jupiter and Saturn will be up all evening as well. Look south - they easily stand out as the brightest objects in the faint constellations Aquarius and Capricornus.

Pegasus truly holds some fantastic astronomical treasures! Continue your exploration of the stars of Pegasus and beyond with NASA at nasa.gov. 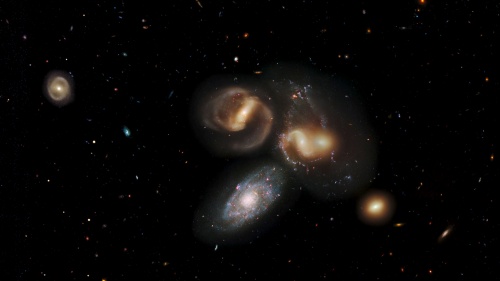 Stephan’s Quintet is one of the most famous deep-sky objects in Pegasus. First discovered in 1877, it contains the first galaxy group discovered (which includes 4 of the 5 galaxies making up the Quintet) – and has been studied extensively ever since. One day this group will merge into one supergalaxy! While famous, these galaxies are hard to spot in all but the largest backyard telescopes – but are a favorite target of astrophotographers. Take a virtual flyby of these galaxies with a tour created from Hubble data at: bit.ly/quintetflyby