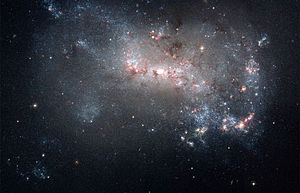 This month as we continue through galaxy season we’re going to take a look at one of the most unusual-looking deep sky objects in the sky.  NGC 4449 was discovered by William Herschel in 1788.  It is an irregular galaxy, very similar in morphology to our galaxy’s companion the Large Magellanic Cloud. It is also known to be undergoing a large amount of star formation, likely triggered by whatever disruption caused its extremely distorted appearance. Curiously, John Herschel actually thought (mistakenly of course) that he had resolved the galaxy into its individual stars.

NGC 4449 is a pretty bright galaxy, comparable in brightness to the fainter Messier galaxies.  The challenge this month is not necessarily in seeing the galaxy, but in seeing just how much of the crazy distorted shape you can make out.  I actually have three different logged observations of this galaxy because every time I look at it, I see something different.  Here’s my log from the last time out:

Such a weird galaxy; it's elongated E-W; on the E end it looks like it's splitting apart; on the S there's a little detached section, almost square looking or pixelated; on the N there's a straight filament; between these is just a dark area; it's more put together on the W end.  No bright nucleus of any kind, but it's overall quite bright.

This was definitely the first time the word “pixelated” ever occurred to me while making a visual observation of a galaxy.  I can certainly understand why an observer such as John Herschel lacking current scientific knowledge of the object would think he had resolved it into stars.  NGC 4449 is not especially difficult to locate.  Just look for the stars of Canes Venatici south of the Big Dipper; 4449 is around 1.5 degrees NNW of β Canum Venaticorum.  See the chart below for further reference. 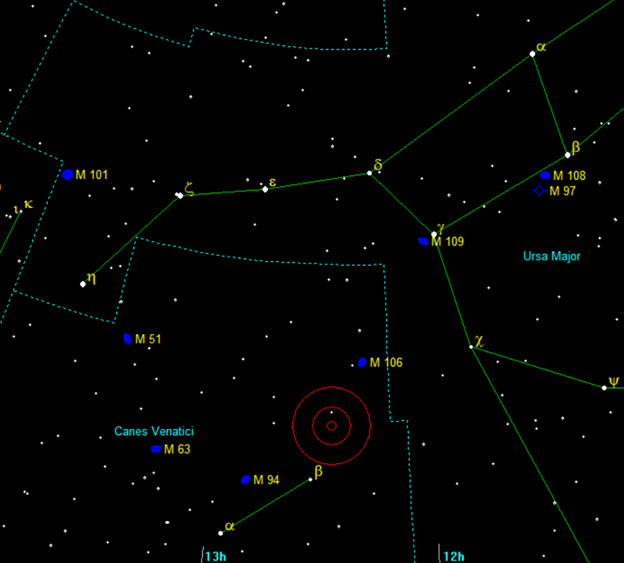 The HAS VSIG would love to hear about your own visual observations of NGC 4449.  Send them to the VSIG list server.  To get on the VSIG email list server, contact me at [email protected].