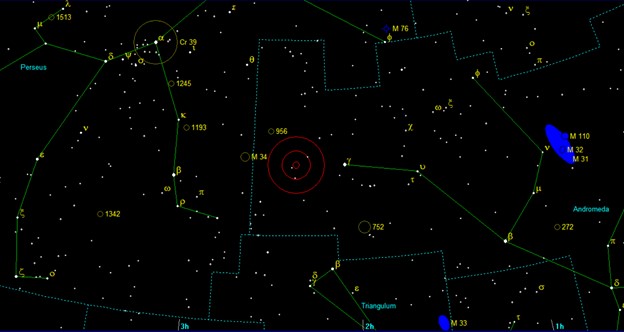 C 891 is an edge-on spiral galaxy located 30 million light years from us, within the local supercluster.  It was discovered by William Herschel in 1784.  It is one of the brightest and best-known edge-on galaxies, exceeded in impressiveness only by the Sombrero galaxy M104, and NGC 4565.  However, when I first viewed it several years ago I found it to be a bit more difficult to see than I expected for such a well-known galaxy.  Nonetheless, once it is located it isn’t too hard to see even in a smaller telescope.  I first observed it in 2014 in my 10” dob at 48x and I descibed it simply as “thin streak, with a dark lane in the middle.”  I re-observed it in my 16” just weeks ago at 131x and logged “much lower surface brightness than anticipated, but easily seen direct vision; long and thin, tapering to the points from the central bulge; very obvious dust lane directly down the center; no bright central nucleus; pretty much uniform in brightness; a few stars superimposed.”  NGC 891 can be seen in considerably smaller telescopes than these, though it will be more challenging, and clear dark skies certainly help (both of my quoted observations here were from the HAS dark site).  Key details to notice include the long thin overall shape, and the dark dust lane bisecting the long axis of the galaxy.

NGC 891 is fairly easily located between Gamma Andromedae (Almach) and Beta Persei (Algol), closer to the former.  It may be even easier to locate if you find the bright open cluster M34 first, as 891 is located almost directly between M34 and Gamma And.

If you have a large telescope and want a greater challenge while you’re in the neighborhood, just to the SE of 891 on the other side of a 5th magnitude star is the galaxy cluster Abell 347.  This cluster has around 10 members brighter than 15th magnitude.

The HAS VSIG would love to hear about your own visual observations of NGC 891.  Send them to the VSIG list server.  To get on the VSIG email list server, contact me at [email protected].