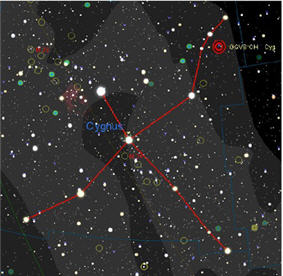 Williamina Fleming worked at the Harvard Observatory in the early 1900’s classifying stars according to their spectra. It is her that you have to thank for classifying stars according to the strength of their hydrogen line (A stars had the most hydrogen, and subsequent letters had less). When it was decided to classify stars by color (temperature) the classifications were rearranged to OBAFGKM, with O stars being the hottest and bluest and M stars being the coolest and reddest. 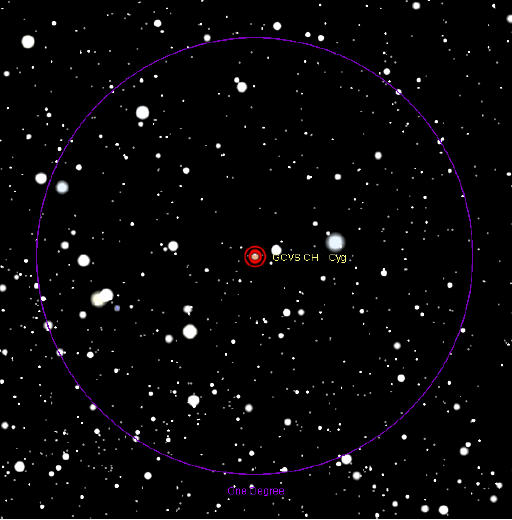 Mrs. Fleming, as part of her work, identified stars that didn’t conform to the majority of stars and published a paper called “Stars Having Peculiar Spectra”. One of these stars was CH Cyg and it was peculiar because it contained the signature in its spectra of both hot and cool stars. How can this be? The easy, and correct, answer is that, yes, what we see is really two stars that are orbiting so close to each other that material is being exchanged between the two stars. Specifically, scientists now think that one of the stars is a M (red) giant and the other star is likely to be a white dwarf. A white dwarf is not really a star in any conventional sense; there’s no nuclear fusion going on. It’s the remnant of a low mass star that has used up all its fuel and which is now glowing from residual heat.

There are variations in brightness that can be attributed to the system being a double star (one star eclipses the other), and there are variations that are likely associated with the transfer of mass to the white dwarf. Think of these as star-burps.

You can check the magnitude of the star at AAVSO.org. Simply enter the star name to view a graph of the brightness over time.