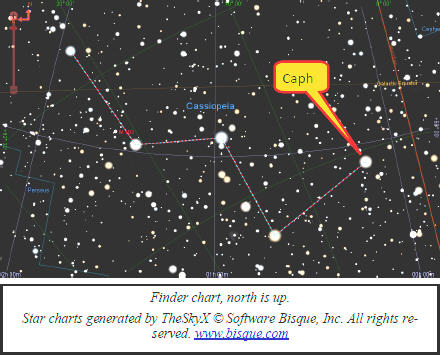 If you know the intrinsic brightness of a star it’s easy to determine the distance using the inverse square law. That is, the brightness we see is inversely proportional to the square of the distance.

Beta Cas is ending its hydrogen fusion phase, the initial phase of all stars, and entering its helium fusion phase (the result being carbon and oxygen). Stars, as they move through life also change positions on the Hertzsprung-Russell diagram and as they do that they go through periods of instability (variability) that informs astronomers about what’s going on with the star.

It won’t be long (in astronomical time), though, before the star has had enough of this phase and begins helium burning as its primary energy source.

The star is high in the sky now and easy to see at magnitude 2.25.
Tweet