Beginner’s Guide: A Mid-summer Swim Up the Milky Way 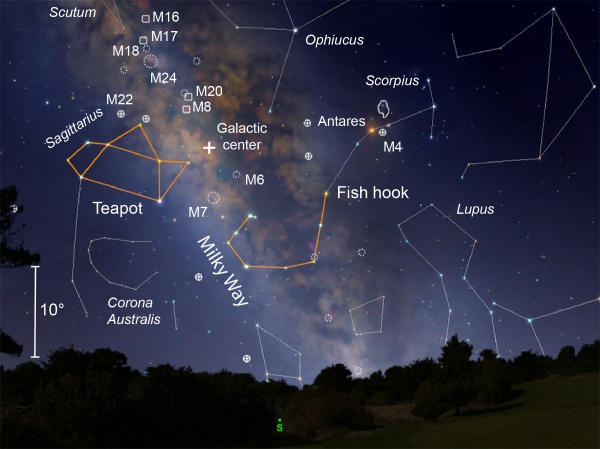 I look forward to mid-summer observing each year. Is it the epic dews of humid summer nights? The sweat dripping on my eyepieces? The hordes of mosquitos buzzing around my head? No. No. And (unprintable) no!

Summer observing brings the pleasures of surfing through the center of the galaxy. It is a delight for novices and old salts (remember the sweating) alike. In this article, I will take a brief look at some of the main attractions of this region, focused on what a novice can see with binoculars or a small scope.

This is a region chock full of nebulas, clusters, and globulars. Even an experienced observer can get lost in the star clouds until dawn. Although the finder charts given here may be helpful, I recommend a book with good star charts as guides. My favorite is the Sky and Telescope Pocket Sky Atlas Jumbo Edition by Roger W. Sinnott. Yes, the Jumbo Edition of a pocket atlas is an oxymoron.

The galactic center is located just east of the spout of the Teapot, an asterism in Sagittarius (see finder chart) at the densest puff of Milky Way. It is highest about 12:45 am on July 1st and reaches that position about two hours earlier with each successive month, so prime viewing time is July and August.

The finder chart shows the area around Sagittarius and Scorpius at about midnight in early July, with the Milky nearly vertical, the Teapot asterism on the left (east) and the Fish Hook asterism of Scorpius on the right (west). Scorpius stands on its tail while the teapot is nearly level, but starting to tip westward. Bright Antares in Scorpius is easily recognizable by its reddish glow.

By naked eye, two lanes of Milky Way stretch towards the zenith with the brighter lane nearest Sagittarius. In dark skies, your eyes are drawn to clots in the Milky Way, which are naked eye clusters. Also eye catching are the “stinger” stars at the end of the Scorpion’s tail. These two stars are lambda (l) and upsilon (u) Scorpius, otherwise known as Shaula and Lesath (see Scorpius finder chart). Although Shaula is a tad brighter, the two closely-spaced, nearly equal brightness stars look like a pair of animal eyes and are sometimes called the “cat’s eyes”. 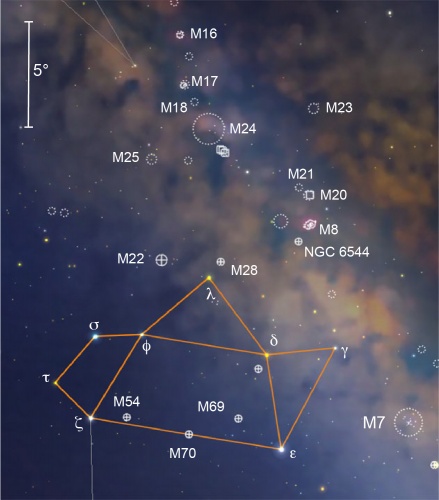 A swim up the Milky Way with 7x50 binoculars is a rewarding way to get acquainted with this part of the sky. Training your binos on Antares reveals a faint fuzz ball south of a line between Antares and sigma (s) Scorpius, the bright star a few degrees above Antares. This is M4*, a bright globular cluster. Surrounding Antares is a broad cluster of stars, designated Collinder 302*. It is sparse and my eye it is hard to distinguish from the Milky Way background.

Now head down to the double star zeta-1 and -2 (z1, z2), where the Scorpion’s tail bends horizontal. In dark skies, your naked eye may see a fuzzy streak pointed upwards. This is the “false comet” asterism. At its head is z1, z2, and the open cluster NGC* 6231, also known as Caldwell* 76. Above that is the open cluster Collinder 316 and a number of other lesser clusters. With your binos, you can make them out as separate clots of stars. While you are looking through your binoculars, you will see another pair of eyes staring at you near the false comet. This is the double star mu-1 and mu-2 (m1, m2) Scorpius, which consists of two stars of nearly equal brightness. It reminds me of seeing frogs eyes in a pond at night, so I call it the frog’s eyes.

Cast your gaze back to the cat’s eyes and you may see two fuzzy spots just above. Those are the open clusters M7 and M6 (see main finder chart). Both are aggregations of perhaps two dozen stars, with M7, on the east (left), and M6 on the west (right). In binoculars, M7 is an irregular grouping of modestly bright stars that stands out because they are close to the same brightness and brighter than the myriad stars in the background. M6 is similar, but more compact. It is called the “Butterfly cluster” as observers have traced out the thorax and wings of a tiny butterfly in its stars. 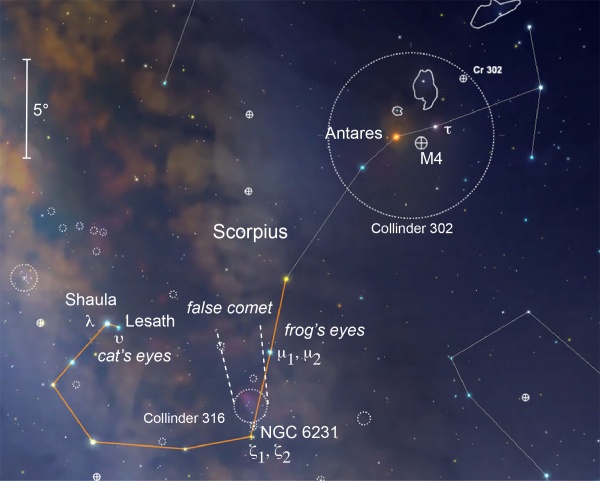 With your binos, scan upward along the Milky Way and you will see some faint fuzzy spots about 10° from M7 (see Sagittarius finder chart). Two tiny faint glows are nebulas. M8, the “Lagoon Nebula”, is the on the south and M20, the “Trifid Nebula” is on the north. M8 seems to glow along a small line of stars and a tiny cluster, NGC 6530. M20 seems concentrated around a few slightly brighter stars. Nearby, other clots of stars form a somewhat circular feature with these two nebulas. This feature contains M21, a loose open cluster with only a few stars, located north of M20, and other loose open clusters to the east of M8, including NGC 6544.

Before continuing up the Milky Way, scan over to the top star in the teapot, Kaus Borealis, aka lambda (l) Scorpius. Your field of view should contain a faint fuzzy spot to the east (upper left) of this star. This fuzzball is M22, one of the premier globular clusters in the northern hemisphere. Another globular, M28, is nearby and three more are arrayed along the bottom of the teapot. They are too faint to be easily visible in small binoculars and require some hunting with a scope.

Moving upward from M22, binoculars show a concentration of countless dim Milky Way stars about 7° from Kaus Borealis. This M24, the Sagittarius star cloud. You can make it out in dark skies by naked eye as a slightly brighter patch of Milky Way. To the east and west are faint open clusters M23 (east) and M25 (west). Their stars are relatively dim, so they appear as faint concentrations of the Milky Way in binos. Farther northward, your binos show two more faint glows. The glow about 2° north of M24 is M17, the “Omega nebula” and the glow about 5° north is M16, the “Eagle nebula”. You might also note a faint bright area between M17 and M24 and this is M18, another loose open cluster containing about a dozen dim stars, slightly brighter than those in the background.

After your bino tour, you will want to train a scope on these bright clusters and nebulas. On a recent trip to the dark site, I took along a small 4-inch Maksutov scope and made the following observations. Globular cluster M4 is a bright, hazy, irregular fuzz ball. With this small scope, it is difficult to make out individual stars.

M7 is so broad that it fills my field of view (~1°) with a 30-mm plossl eyepiece at 43x. This cluster is loose, with a slight concentration in the middle, but overall appears as a scattering of dim stars that are brighter than the background. M6 is similar, but more concentrated, a loose cluster with about 20 dim stars. Several of the brighter stars are at the center and form the butterfly’s thorax. Dimmer stars to the sides are its wings.

The globular M22 in Sagittarius is another bright, irregular fuzzball. With this small scope, I can barely make out a few individual cluster stars from the background and the little cloud seems to have some granularity, suggesting other faint stars. The star cloud M24 is too big to make much of an impression in a scope with a 1° field – it merely looks like myriad Milky Way stars.

Both M16 and M17 show faint glows. M17 has a distinct wedge shape. M16 apparently looks like an Eagle to some observers, but not in a 4-inch scope. I can only see a faint ghostly glow around a cluster of a half dozen stars.

This has been a quick swim through the Milky Way. Any of the objects mentioned above are worth a longer look. At the dark site, you will often find other members with bigger scopes. Many are happy to show you these splendors if asked.

*Catalog numbers. Designations with a leading “M”, e.g., M4, are Messier objects. This terminology comes from the catalog of bright objects compiled by French comet hunter Charles Messier in the 18th century. This list contains many of the bright deep-sky objects. The abbreviation “NGC”, e.g., NGC 6231, are objects from the New General Catalog of Nebulae and Clusters of Stars, an astronomical catalog compiled by Danish astronomer John L. E. Dreyer in 1888. The Collinder catalog (often abbreviated Cr) is a list of clusters compiled by Danish astronomer Per Collinder in 1931. Yet another catalog is the Caldwell list, compiled by British astronomy popularizer Patrick Moore as a complement to the Messier list.

Sagittarius finder chart. Notations and symbology are the same as the overview chart. Base map generated with SkySafari 6 Pro.