Its December and as the weather cools and the toddies get hotter, all good astronomers thoughts turn to – NEW EQUIPMENT!! Which brings us to our subject for this month’s AP Corner.

Over the last month, there have been a number of our members seeking input on intended equipment purchases to upgrade their systems, and maybe expanding their options to get into astrophotography. For instance, Jim King asked the HAS list server whether or not he would see enough visual improvement to upgrade to a Celestron Edge HD SCT (on an Alt Az mount), which would also possibly open the door to astrophotography later on.

This type of question has multiple answers, depending on the objective of the person asking the question. As Jeff Lepp responded – “Traditional advice is buy a scope for visual or buy a scope for astrophotography but don’t buy a scope to do both.” He then went on to explain that the state of current technology and cost of astrophotography equipment makes this answer somewhat obsolete. “It all depends on what you want to do” he said.

There are several ways this could go, depending on how important astrophotography is to Jim. So, for the purposes of answering this question, I will start by answering the question as Jim asked, take into account that in astrophotography “there is always an upgrade” then finish with advice to someone who really intends to get into astrophotography. In each case the upgrades are presented in the order from lower to higher cost.

Jim’s primary question is about the quality of the Edge HD optics for visual observing. An SCT on an Alt-AZ is a very good visual telescope. The Alt-Az mount makes for comfortable observing and is easy to automate for GoTo operation. The optics on a standard SCT are designed to be easy to mass produce, with both the primary and secondary mirrors ground to a spherical shape (very forgiving) and the corrector plate designed to eliminate spherical aberration from the mirrors. The result is good images in the center of the FOV, but because the focal plane is curved, modern wide field of view eyepieces will be less focused and other aberrations like coma can be seen at the edges of the image.

Edge HD optics (like Meade’s ACF) change the figure of the secondary mirror to a more hyperbolic shape (and change the corrector plate to match). This flattens out the image plane and eliminates much of the coma and other aberrations seen at the edges of a standard SCT FOV. So, for visual observing, if you plan to or currently use modern wide field eyepieces, upgrading your SCT optics might be worthwhile, but you would do well to check them out on your friends scope with your own eyepieces before you pull the trigger.

But what about astrophotography? An Alt-Az mounted SCT has several less than optimal features that make it difficult to do high quality DSO astrophotography. But that does not mean that good and satisfying work is not possible.

So what are the downsides of an Alt-AZ SCT?

Are the Edge HD optics worthwhile to have for astrophotography? In a word YES! The flatter image circle and reduced coma and other aberrations that come with this package make the OTA a better optical system for astrophotography than a standard SCT. These OTAs also are fitted to accept a Hyperstar lens system in place of the secondary mirror ( which can be safely removed without taking off the corrector plate) turning the OTA to a lower focal length fast f/2 optic, designed for astrophotography.

So what astrophotography can you do with an Alt-Az fork mounted Edge HD SCT? 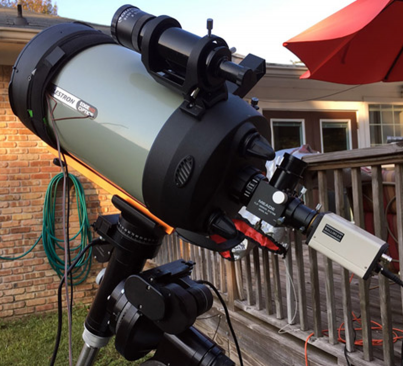 I personally took this path, adding a wedge to my 8 inch Meade LX200 and struggled for a couple of years until I finally got it to work, though I was frustrated that at least 1 out of 3 of my subframes had to be trashed. In a short time thereafter, I got my first GEM and a good refractor. The change in imaging setup significantly increased my imaging efficiency and cut down the labor involved to get the camera started capturing sub-frames. But Wait! There’s always an Upgrade!

If getting into EAA interests you, please be sure to attend our virtual meeting on January 8th, (or watch the video afterwards) as we will have an excellent presentation all about EAA to get you started.

We have taken the EAA track to its logical end, and its now appropriate to discuss what you might consider if astrophotography is really more of your objective. This means that you have seen the many high quality astro-images published in magazines or online, and when you do, you say to yourself “I want to do as good or better than that”.

In this case, I would strongly urge you to bypass the Alt-Az mount and get the best GEM with the highest payload you can afford, and that is light weight enough (not including the counter weights or OTA) for you to handle and lift onto your tripod or pier. A Gem like this will have GoTo capability and will cost more upfront than an Alt-Az fork mount, but the difference in ease of use and performance are generally worth the expense. Add in a wide field refractor, like an 80mm f/6 to f/7 frefractor, and you will have a decent imaging rig which at about a 500mm focal length will be reasonably forgiving, and net you decent images with less time and trouble than a fork mounted SCT will.

Using a GEM will require you to polar align the mount before you use it even for visual use (though for visual use its not as critical to be accurate, just close enough). This is not a major drawback as polar alignment is fairly easy to master, and there are now several technology driven methods that make it even easier to get aligned than the old days of drift alignment. (Polar alignment will be the subject of next month’s AP Corner).

What the GEM does for your astrophotography is:

Astrophotography can be a highly challenging pastime that has high rewards when you get everything working right and produce a great image. It can also become an obsession, and There’s always an Upgrade!  So, having said that remember I have warned you! Please don’t blame me if this article helps you on your way to becoming hooked and obsessed!