I miss outreach events.  Most all have been cancelled due to COVID and have been for about a year.  Even so, I have managed to have several small gatherings within my subdivision.  Last year presented some unique opportunities that simply could not be missed. 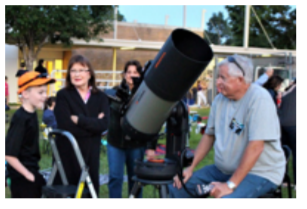 Still, I miss the excitement of young, inquisitive minds with glowing eyes of anticipation.  I miss the adventures.  Getting to some of the remote locations can be an adventure in itself.

One outreach stands out in my mind, and likely always will.  A few years ago, several of us had gathered at a downtown Houston public park to share the night sky.  As usual, there were scads of folks wandering in and wanting to participate.

Along about 9:00, I had a fairly long line of people at my telescope…until suddenly, I didn’t.  Looking around, I saw a group of six young men, headed my direction…and my line of 20 to 30 folks had simply melted into the darkness.

One of the young men walked up to me and demanded, “What are you doing in my (7-letter expletive, somewhat akin to a gerund) park?”...

Taking a deep breath, I pointed at the Moon and responded, “Looking at that”.

Me: “Have you ever looked at the Moon through a telescope?”

I pointed to my eyepiece and invited him to have a look-see…which he did, with, “Don’t mess with me!” all over his face. He looked through the eyepiece for about 10 seconds.  He then glanced back up towards the Moon, then went back to the eyepiece.  Next comment, “What are all those holes?”  The door then opened for a brief discussion of lunar topography...to which he actually paid attention.  He was fascinated by impactors.

He then told his posse, “Y’all gotta see this”!  They lined up and they did…having somewhat similar reactions accompanied by some jibber-jabber I failed to comprehend.

I then pointed to a building and told him Saturn was coming up shortly from behind that building, and to come back by in about thirty minutes.

Thirty minutes later, he and a dozen more came by. I then explained and showed-off Saturn.