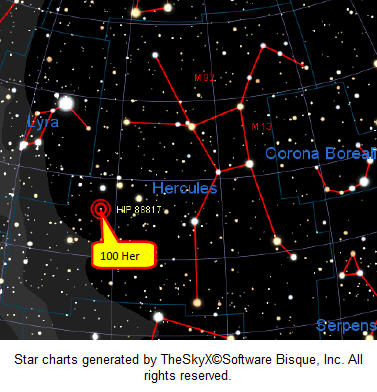 The STF (think ‘Struve the Father’) designation is interesting because it identifies this star as being in the Friedrich Georg Wilhelm (von) Struve (1793-1864) catalog. The catalogs for FGW Struve are written with a Sigma and then a catalog number (example Σ2280) or with the STF designation. Those cataloged by his son, Otto Wilhelm Struve (1819-1905), have the letter O preceding the Sigma character (example OΣ18) or use STT preceding the catalog number.

What you’ll see when you look at this double star is a pair of stars (nearly) perfectly matched in brightness and color. When I see a pair like this I think of headlights approaching on a long dark road.

The color designation indicates that each of these stars is white, with a ‘surface’ temperature between 7500 and 10,000 degrees Kelvin. They are low mass stars and a spectral analysis would show a strong hydrogen absorption line (mean that there’s a lot of hydrogen in the outer layers of the star).

The August, 2007 GuideStar has another double star in Hercules, 95 Her.