HAS Monthly Meeting Presentation - Via Zoom

Robbin Jones from the Astronomy Club of Tulsa will share with us how he uses EAA (Electronic Assisted Astronomy) to facilitate his observing from home. He will be showing us how he gets amazing images using his telescope set up in his backyard in the middle of a Tulsa suburb. Images form in just a few minutes on his computer set up indoors in the comfort of his living room. 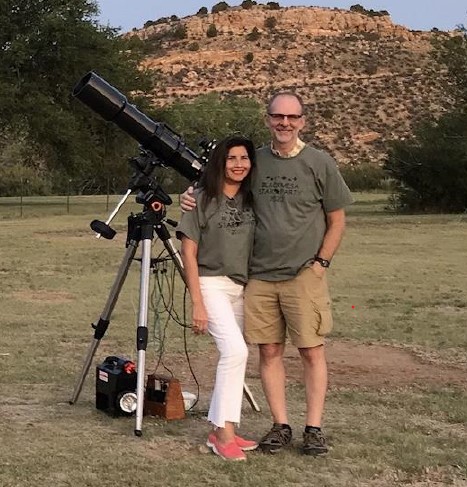 Robbin has been a member of the Astronomy Club of Tulsa for 10 years. His astronomy interest began in elementary school. Robbin’s father worked for a NASA contractor in the 1960’s on the lunar module project, Apollo missions 8 through 17. His father’s workplace was Redstone Arsenal US Army Missile Command in Huntsville, Alabama.

On camping trips his family would lay out under the stars and watch for “shooting stars”, i.e., meteorites. When he was a teenager he saw the Milky Way on a Colorado backpacking trip for the first time and was mesmerized by its beauty. His astronomy interests lay dormant for several years while he finished college and raised a family.

In 2004 he and his wife Rosalynn purchased an inexpensive refractor at an after Christmas clearance sale in a department store. One cold winter evening as he was using the refractor he pointed it at a bright blue star. As he looked more closely he could just make out the rings of Saturn. At the moment his interest in Astronomy was rekindled. A year later he purchased a Celestron 8SE, the “one armed bandit” scope / mount and spent many evenings in his backyard observing and learning what he could about the night sky.

A nearby neighbor invited him to attend the Okie-Tex star party in 2010 and he has attended each year since. In 2014 he began his plunge into Electronically Assisted Astronomy (“EAA”) by purchasing his first video camera in an attempt to see more from his Bortle 9 backyard.

Since 2018,  Robbin has gotten much more involved in EAA and currently has four video cameras and two remote control scope / mounts. He does not consider himself to be an astro photographer but someone who wants to see more than a traditional eyepiece allows and maybe take a quick image. He enjoys the challenges of making various technologies work together to see faint objects from his suburban backyard in Broken Arrow Oklahoma.

To Register for the Zoom Meeting: Since we're all practicing safe social distancing, we have decided to bring our speaker to you virtually through the Zoom online meeting platform! You must register for this presentation in order to attend. You may do so by using the link below:

Please watch your email, as you should also receive an email inviting you attend. The email will include any up to date changes (if any) on meeting times etc. You may also register using the link in the email, however it is only necessary to register once.

We'll have the online chat feature available to us during the talk, and once the presentation is over, we can open up the audio lines for more questions.  I'm excited that this we're able to get together in this fashion, and I hope you can join us then.  We hope to see you online with us on Friday evening January 8 th!